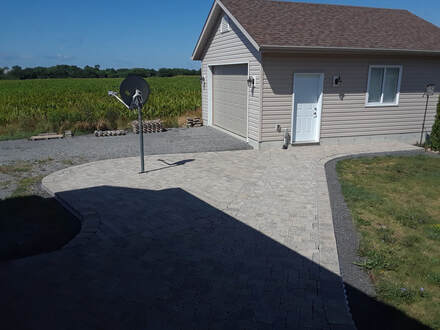 A walkway between the house and the workshop. Sandra and I get bouts of enthusiasm for these projects, then suffer for months while doing them. Halfway through, while she was hosing me down so that the 33C plus 90% humidity wouldn't kill me, we decided that we are now old enough and wise enough that this is the last time. From now on we will seek professional help. 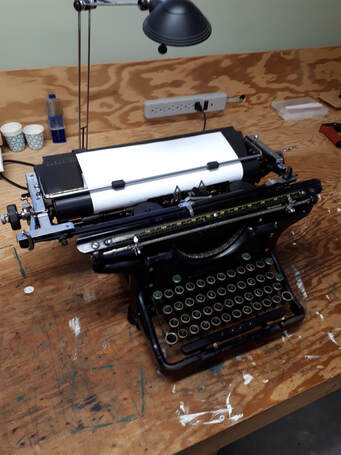 I was given this 1937 Underwood model 6 in the early seventies. After I moved to a more modern machine I stored this one in the basement - the unheated side of the basement - where it rusted to immobility. When I discovered the mistake I doused it in WD40 and stored it properly until the day when I'd have time to fix it. That day has come. Much penetrating oil and brute force required to free the mechanism, but it now works. If you're bored, go to an office supplies store and ask for a typewriter ribbon - glazed expressions. 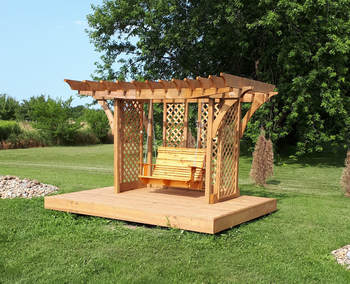 And a voice said "let there be a swing in my garden", and they laboured together (in hot, humid weather), and a swing was produced. 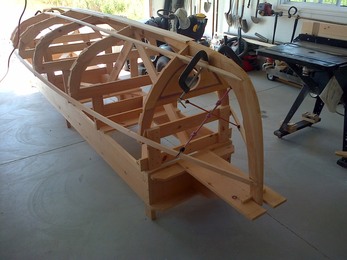 My working life involved mechanical designs based on straight lines and simple curves. Boats made of wood seemed like the result of some sort of magic; not a straight line to be seen. I've always wanted to have a go at it, and I've always been fascinated by sailboats. In preparation to build one I've taken a dinghy course and a keelboat course (overturned the first, grounded the second). Now I've started construction of an Arch Davis "Penobscot 14". Started in the summer of 2017.
​ 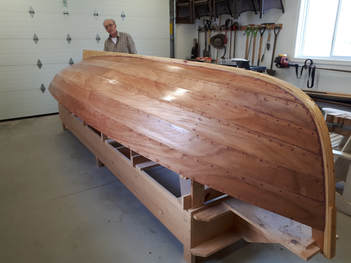 Progress as of February 2018.
​
August 2019      Finished - if you ignore the zip-ties holding the jib on
The wind chimes have their own page now.
We have a dormer in the bedroom that looks south out over Lake Ontario. After making a model from cardboard (the fun part) I built the day bed out of 2 X 4s and covered the frame with mahogany door skins (all available at the local supply store). The drawers were from a piece of second-hand furniture that we already owned. The cushion is a children's mattress from Ikea. Sewing by Sandra.
The solar project has its own page now. 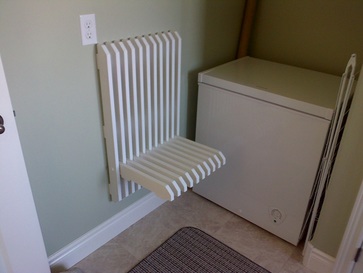 A fold-down chair for folk who have trouble putting on boots while standing on one leg (folding to allow access to the freezer).
Two repairs: Sandra's parents' 1948 Sparton radio (built in London Ontario). The online radio community said that it wouldn't be the tubes and that I should replace the capacitors. I did. The hum went away, but it still didn't work, so I knew that it had to be the tubes and ordered a set. The online community was correct. It wasn't $60 worth of tubes. It was 2 cents worth of ordinary resistors.

Update 20150829: got the turntable working too. Note on quality control in 1948: non-existent. Found two solder joints that weren't, one on a line-voltage switch.

The clock belonged to my parents. They gave it to me when Dad built a grandmother clock to replace it. His hobby was cabinetry. Decades later, after more than one expensive visit to the jewellers, it had stopped again. I decided to have a go at it myself (thank you, internet). It was just a case of cleaning and then oiling (with 3-in-1 oil which is a NO-NO, but if the thing isn't working what's to lose)? Now it's happy.

Update 20150829: no, it's not. The oil slowly dried out and now the main spring has broken. Proper oil and repair next winter.
Update 20160524: OK, maybe next, next winter. The rumour is true; when you retire you get so busy that you wonder how you found time to work.
Update 20191127: not going to happen. Sometimes you have to just let go. 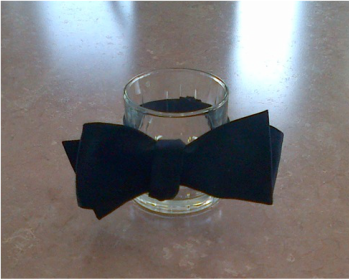 I always felt guilty about not knowing how to tie a bow tie. That little hole of ignorance has been filled. Thank you to whoever invented Youtube, because the instructions that came with the tie must have been for a carburetor.